Even if you were separated from family and friends by time or distance, what would it mean if virtual reality could believably offer you a game of catch with them anyway?

The wrist-strapped accessory put together by Microsoft researchers features a piece that swings into the wearer’s palm for a believable catching and throwing experience in VR.

Today, most VR developers create their own throwing and grasping mechanics, and these can feel different from world to world or controller to controller. The haptic feedback provided by consumer VR hardware today, meanwhile, might be described as little more than buzzing. Still, the effect can be pretty satisfying for certain applications, like pulling back a bowstring or the slight tap of ball against a table tennis paddle. Microsoft’s researchers seem to be proposing a completely different level of believability with PIVOT. 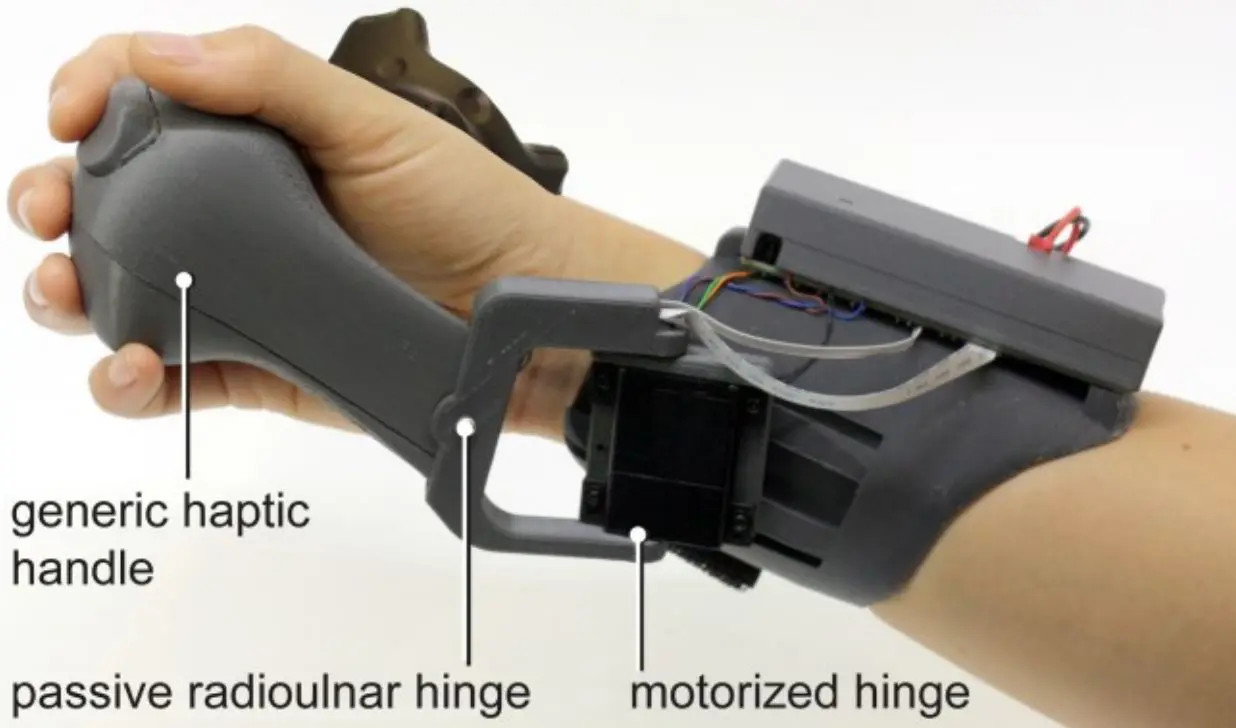 The new research presented as part of the 2020 ACM Symposium on User Interface Software and Technology (UIST) is detailed in a paper called “Haptic PIVOT: On-Demand Handhelds in VR” co-authored by Robert Kovacs, Eyal Ofek, Mar Gonzalez Franco, Alexa Fay Siu, Sebastian Marwecki, Christian Holz, and Mike Sinclair. According to a blog post about the work, PIVOT is attached near the wrist, and they said that “we’re able to render the momentum and drag of thrown and caught objects, which are governed by Newton’s laws, including simulating speeds of objects upon reaching the hand: The robotized haptic handle deploys when needed, approaching and finally reaching the hand, creating the feeling of first contact—going from a bare hand to one holding an object—thus mimicking our natural interaction with physical objects in a way that traditional handheld controllers can’t.”

The paper linked above closes with the suggestion that these “results support PIVOT’s potential for future use.” Future work might look at reducing weight of the wearable or adding more motorized pieces to better line up the ball mechanism with the hand. Other sensors could be added as well, like cameras for finger tracking, that might enable more precise interactions.

We’ve seen other research with objects that stretch or transform in shape — could that be applied here to offer different types of in-hand objects which swing into position at just the right time? The paper details other “exploratory” prototypes they’d considered, including a design that featured a retrofitted Windows Mixed Reality controller’s handle that could swing into your grip, and another design with a 3DoF joystick.

If you wore a future PIVOT-based haptic device on your arm, then, you might be able to put on your baseball glove and catch a ball, release it from your glove and then catch it with your other hand to throw it back to someone who isn’t actually in the same place as you.

Recently emerging out stealth, Singapore based Deca has revealed an ambitious PC VR headset called DecaGear. With built-in face and hip-tracking, the company says the headset is designed to embrace social VR content, but also promises very high resolution displays, inside-out tracking, and even wireless game streaming from your PC with an add-on accessory. At just $450 and a promised release date of May 2021, consider us skeptical until we see more evidence that the company can deliver on its ambitions.

DecaGear emerged this month seemingly out of thin air and has not shied away from making big promises.

The venture, purportedly based in Singapore, is headed by CEO Or Kuntzman who, according to his LinkedIn profile, has co-founded two companies between 2004 and 2013, and was most recently the Managing Director at a now-defunct studio called Betastamp, which described itself as a sort of startup-idea incubator.

According to the profile, Kuntzman’s latest work is founding Megadodo Simulation Games which “produces and operates D.E.C.A, a free-to-play massive multiplayer virtual reality gaming platform,” though I haven’t been able to find any external evidence of the MMO’s existence. Alongside ambitions of a VR MMO, the company apparently has also pivoted into full blown development of its own VR headset called DecaGear. The DecaGear headset is claimed to have a 2,160 × 2,160 (4.6MP) per-eye resolution at 90Hz (which would match the class-leading Reverb G2), IPD adjustment, face-tracking with two inward-facing cameras, motion controllers with finger-tracking, four camera inside-out tracking, and full support for SteamVR content. All supposedly for just $450. The company says the face-tracking feature would be ideally suited for social VR content like VRChat, and presumably also the company’s own D.E.C.A VR MMO.

While Megadodo is making big promises and doesn’t seem to have much concrete history to point to, at least the details of the DecaGear headset seem thoroughly considered and the company has even offer up some good ideas, like the DecaMove hip-tracking attachment. The puck-like device is designed to clip onto your belt so that VR apps can understand your hip-direction in order to provide a locomotion heading that’s independent from your head or hands. Implemented correctly, that really could make thumbstick-based locomotion in VR more intuitive and make avatar movements look a bit more natural. The company has released two videos, one which shows its face-tracking in action and the other which shows hip-based locomotion.

Megadodo is also promising DecaAir, an add-on accessory that allows users to stream VR games wirelessly from their PC to the headset for a mere $50. Once again we remain skeptical considering major PC headset makers have either opted to avoid wireless streaming due to latency and quality issues, or have released expensive hardware to make it possible, like the $350 Vive Wireless Adapter. Between the too-good-to-be-true prices, the fact that the company is taking pre-orders right out of the gate, and with no track record of hardware development, it feels way too early to say whether or not Megadodo is really capable of delivering everything it claims. We’ve reached out to the company to learn more about its headset and how it expects to achieve its ambitious vision.

Thanks to Adil3tr for the tip!

Blaston, the latest VR title from Resolution Games, is a 1 vs. 1 multiplayer VR game that thinks completely outside the box and explores new and interesting mechanics that challenge the notion of what a ‘VR shooter’ can be.

I’ve spent nearly a decade now reporting on the VR industry and watching VR content grow from the earliest demo experiences for dev kit headsets to the shiniest big budget exclusive titles. And though there’s a growing number of games that truly feel ‘VR native’, the majority of VR content that we see today feels like it’s still trying to break free of the tropes of non-VR game design.

Quietly launched just last week on Quest (and coming soon to SteamVR), Blaston immediately stands out to me as a game that was designed with a properly blank canvas and developers that dodged preconceptions about how a shooting game could work in VR.

Blaston could be called a First Person Shooter—after all, it’s a 1v1 shooting game—but it’s really nothing like any you’ve played before. After playing the game for a few hours, the most succinct way I can describe the game is ‘PvP bullet hell shooter’. Here’s the gist.

Two opposing players stand on raised platforms. At the start of the match weapons begin to spawn at the edges of the platforms. Each weapon fires projectiles that differ greatly in speed & size, and guns have vastly different ammo counts & rates of fire.

Each player has a health bar and takes damage as they get hit by projectiles. To avoid them, players need to duck, weave, or block—without falling off the platform—all while returning fire.

It looks chaotic, but the slow movement of the projecticles and the differences in the weapons leave the door open to gameplay that’s deeper than just shooting. Not just in the way you dance around to dodge incoming fire, but also how you pick which weapons to bring with you into the game and how you use them together in the heat of battle. There’s 22 different weapons in Blaston, each with their own bullet properties and spawn timers. Players choose six weapons for their loadout which spawn around them during the match. With creative weapons like laser grenades, guns with curving projecticles, and even deployable shields for blocking incoming fire, there’s tons of room for creative strategizing in offense & defense. In a nutshell, Blaston is about making your opponent move how you want them to. Once their movements are predictable, then you know where to shoot to score damage. But your opponent might have a loadout that foils your underlying strategy, forcing you to adapt in real time and encouraging you to tweak and refine your own loadout for the next match.

In this way, Blaston is almost like a bullet hell game where—instead of a computer shooting a bunch of bullets everywhere—an intelligent agent (the other player) is the one making the ‘map’ for you in real time. It’s a genius arrangement.

Though one is a shooter and the other a melee game, aspects of Blaston’s design reminds me a lot of the artfully designed Until You Fall. It’s no coincidence that both games take special care to control the pace of combat in a way that allows for deeper gameplay to emerge, engaging both your micro-skill (aiming, dodging, and blocking) and your macro-skill (pre-game planning and overarching strategy). Nor is it coincidence that the core gameplay of both are build around engaging bodily movement instead of heavy use of buttons and sticks.

What isn’t part of Blaston is an important lesson too. There’s no reloads. No stick locomotion. No ADS. No inventory. No giant map. No shields. Etc, etc.

None of those things are necessarily bad for VR, but the assumption that they should be in there (a holdover of non-VR game design) would have steered Blaston toward serving preconceptions instead of the reality of its gameplay.

When it comes to VR game design, counterintuitively, one of the biggest challenges for developers seems to be stepping outside of the box of non-VR game design, to undo assumptions about what should be, and to explore new ideas that don’t neatly fit into established non-VR genres like ‘shooter’. With Blaston, developer Resolution Games has clearly demonstrated that capacity and paved new ground for all of us to consider.